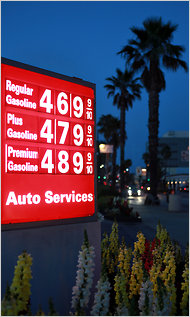 The hard truth in numbers at a gas station in Santa Monica.

“I only stopped here because I’m running on empty,” said Maura Trejo, a real estate agent. “You’d have to be pretty silly to fill up here. What a waste of money.”

It was substantially better but still pricey across the street. Shell was selling regular for $4.23 a gallon. One more mile east, it was $4.31 a gallon.

Even when gasoline is not near its peak, California almost always has the highest average gas prices in the continental United States, owing to a combination of high state and local taxes and stringent state fuel regulations. This forces Californians to be more calculating than drivers in other states about where to buy, how to track down cheaper options and whether to spread the word about a particularly cheap station.

Certainly, anyone who spends time shuttling around Southern California’s inland suburbs, where the round-trip commute to Los Angeles can be 100 miles a day, knows that buying gas from a station off any freeway is an express lane to pauperdom.

Really. Is $5.00 a gallon just next month. We gotta do something about this.