Wow, I’m Getting a Man Cave- Every Mans dream room I’m getting a man cave.

This dynamic duo comes to a lucky dude’s home and tricks out a private space for the man of the house within 3 days. “So much time and so little to do. Wait a minute. Strike that. Reverse it.”

If you’re a woman, this is like Oprah’s favorite things for men.

If you’re a guy, you know exactly what this is; visions of kegerators, high-tech electronics, giant flat screen TVs, poker tables, bars and wine rooms should be dancing in your head by now.

So how did this happen? A few months ago my wife, Claire, and I were thinking of finally finishing our basement.   As we started to compile ideas and a budget, about $30,000, we realized we were looking at sheet rock, a drop ceiling and carpeting. Not exactly something to write home about. 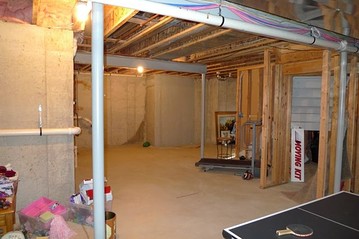 Here’s the basement before ….

Enter everyone’s favorite answer box, Google. Claire popped in the terms “great basements” and the search engine spit out numerous results, including the site for the Man Caves show.  A few facts about being a candidate on the show:

I submitted a theme based on Wall Street and Old New York. Man Caves came back with the idea of building a basement steakhouse. What would you build? My wife is worried they are going to give me a dry aging room or a Montague Steakhouse broiler.

I ain’t worried. Stay tuned as we follow this to completion.